Greetings, friends. Here is the actual account of how a small group of conservative knitters have convinced themselves that "SJW knitters" are calling green socks racist.

It's a story in multiple parts.

Part one is probably the part that most people in the online knitting world know by now and I won't go into much detail on it here. Like the rest of the world, the online knitting world (primarily on Instagram and Ravelry, but also Twitter) started having a discussion about the presence of racism in our community and what we should do about it. Unfortunately, a part of the community viewed any opinion that racism existed in knitting as "bullying". Anyone who spoke up about their experiences as  BIPOC knitter was labelled a bully, anyone who pointed out examples of racism in the knitting community were accused of bullying and attempting to destroy other peoples' businesses. A few blog posts, Instagram posts/stories and Youtube videos were made expressing views along these lines. Which leads me to part two.

Part two: one of those Youtube videos was made by a designer calling herself The Blue Mouse. She also posted on her Instagram account a picture of a pair of green handknit socks, and a statement that she was no longer designing full time because there was "some serious bullying going on in this community". Here is a screenshot of what she posted:

This leads on to part three.

Part three: A different knitting blogger/Instagrammer saw the above picture of green socks, but apparently didn't read the caption that went with it and clicked "like".  Apparently, some of her followers informed her of what the actual caption said and the contents of The Blue Mouse's Youtube video and she realized it wasn't something she actually wanted to "like". She posted an apology on her Instagram stories: 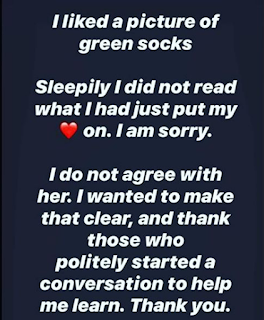 Now, a normal person would probably see this as fairly rational. She accidentally "liked" something she didn't agree with, and she wanted to rescind that. Seems like it would be the end of the story, right? Apparently not!

Part Four:  The Crusade Against the Mob of SJW Bully Knitters saw a lot more to this and rallied together to point out what a terrible injustice this was. 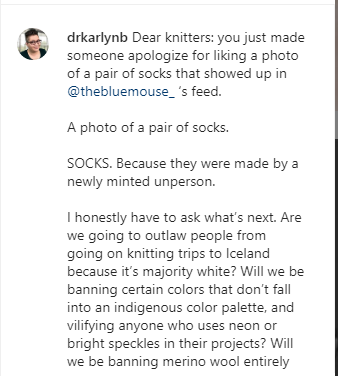 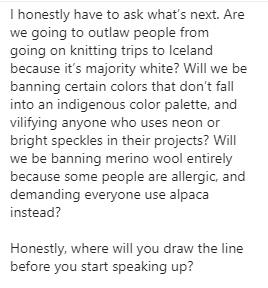 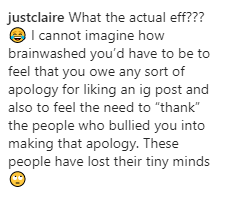 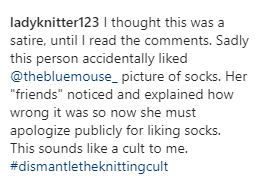 Now, to be very clear: the person who posted the apology in her Instagram Stories gave no indication that she was coerced or bullied into apologizing, and there is absolutely no evidence that she was harassed in any way for clicking like on the green sock photo. Her apology even says that the conversation she had was polite. None of her posts on Instagram after she posted that apology mention the incident at all and it seems pretty clear to me that she posted an apology and then moved on with her life. So the outrage at her apology seems somewhat overblown. But it doesn't end there!

Posts using these hashtags started to get a little weird. I won't post screenshots of all of them, but let's just go with the weirdest one: 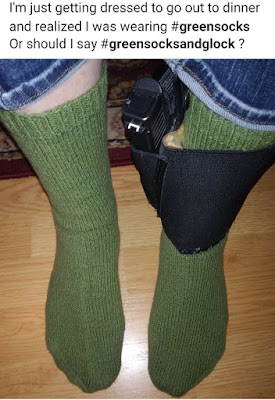 The Crusade Against SJW Bullies and Their Hatred of Green Socks continued, and it became this weird thing where they seemed to think that announcing that you liked green socks was somehow "triggering". And then someone tweeted this at me (among others): 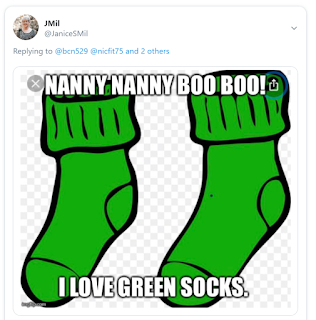 I couldn't help thinking that if you weren't following this drama (which most people weren't), this post would be incredibly confusing. Without context, it makes absolutely no sense. That struck me as pretty funny, and I tweeted this:

This tweet was wildly misinterpreted by our Crusaders, who claimed it was me saying that green socks were a dog whistle of the alt-right: 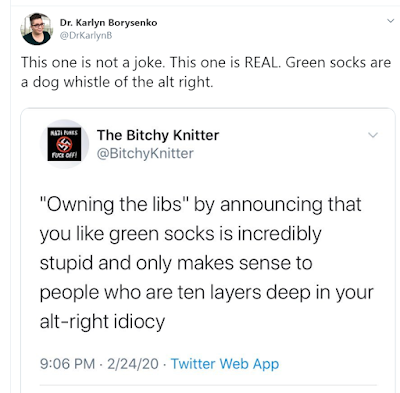 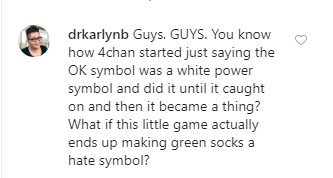 People took this very seriously and started ranting about the crazy libs:

The Crusaders were then inspired to have a #greensockskal on Instagram and Fiberocity. There were a grand total of 48 posts with that hashtag and 15 people joined the Fiberocity group. I don't think it was the massive clap back they hoped it would be.

As the story got older and started to move out of peoples' recent tweets and Instagram posts, the details started to change. Suddenly the word "racist" crept in, with people claiming that they were called racist for liking green socks:

Which brings us to today, and the inspiration for this entire blog post. The untrue claim that "SJWs" are saying that green socks are racist: 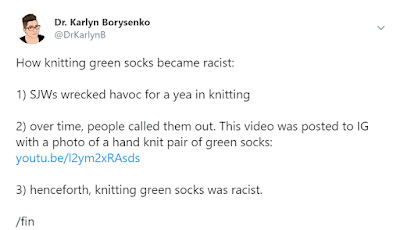 As you can see from the rest of this post, this is a false account of what actually happened.

I look forward to the dramatic reading ;)
Posted by The Bitchy Knitter at 5:49 AM

Who is this Bitch?